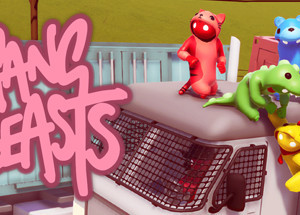 Gang Beasts
All trademarks belong to their respective owners.

Gang Beasts
All trademarks belong to their respective owners.
Ads

Gang Beasts is a fighting game with an interesting twist. The game is set in a kind of cartoon world where the characters are gelatinous, colorful creatures. The objective of the game is to fight your opponents and knock them out of the arena. The game is played with up to four players, and can be played online or offline.

The gameplay of Gang Beasts is quite simple. The controls are not very complex, and the game is mostly about button mashing. There are a few different moves that you can do, but the main goal is to just hit your opponents until they fall off the stage. The stages are all set in different locations, and each one has its own hazards. For example, one stage takes place on a construction site, and there are open pits that you can fall into. Another stage takes place in a meatpacking plant, and there are conveyor belts that can carry you away if you're not careful.

The gameplay of Gang Beasts is simple yet addicting. The controls are easy to learn and the game is very straightforward. There are a variety of stages to play on, each with its own hazards and obstacles. The stages are also interactive, and can be used to your advantage. For example, one stage takes place on a construction site, and players can use the crane to swing opponents into the path of oncoming traffic.

The replayability of Gang Beasts is high. The game is quite replayable, because there is a lot of variety in the stages and the characters. There are also a lot of unlockables, such as different outfits for the characters.

​​Gang Beasts is a multiplayer party game with silly characters and humorously brutal gameplay. The objective of the game is to knock your opponents off of the stage with punches, kicks, and other various attacks. The game is played with up to four players, and can be played offline or online.