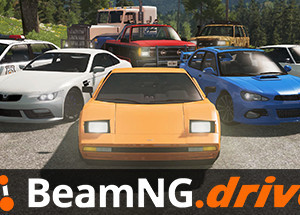 BeamNG.drive
All trademarks belong to their respective owners.

BeamNG.drive
All trademarks belong to their respective owners.
Ads

BeamNG.drive is a soft-body physics vehicle simulator featuring both realistic driving physics and crash physics. The game features a realistic damage system, with each vehicle part being simulated individually. This allows for a very high level of realism in the game's crashes. BeamNG.drive is a vehicle simulator game developed and published by BeamNG. The game was released on May 29, 2015, for Microsoft Windows, Linux, and macOS. The game is currently in Early Access.

BeamNG.drive is a very replayable game, with a high level of customization and a large number of vehicles and levels to play. There are also a number of mods available for the game, which add even more content.

BeamNG.drive is a soft-body physics vehicle simulator featuring both realistic and arcade style gameplay. The game is notable for its accurate and detailed depiction of vehicle damage and destruction. BeamNG.drive is primarily a vehicle simulation game. The player can drive around in various vehicles, exploring the game's open world environment. The game features a realistic damage and physics system, which allows for extensive vehicle customization. The player can also create and share custom maps and vehicles with other players.

BeamNG.drive
30GB
Take a note. This app’s size is bigger than the average in this category